Today was the Year 6 Graduation Ceremony. This has been such a fun and vibrant group. The class really are such all-rounders – chess players, actors, artists, musicians and sporting stars - the list goes on. They have been so involved in the extra-curricular life here at PGP and been fantastic role models for the younger children. The children had prepared speeches to deliver, sharing their favourite moments from their time at PGP. We will miss you, Year 6, and wish you all the very best of luck at your next schools.Independent Schools Council IAPS #ParsonsGreenPrep #parsonsgreen #fulham #london #sw6 #STEAM #science #technology #engineering #art #maths #school #parents #families #family #parenting #education #teaching #farewell #goodbye #secondaryschools #seniorschools #newschools #newbeginnings #nextsteps #year6 #leavers #graduation ... See MoreSee Less

Today was the #Year6 #Graduation Ceremony. The children had prepared speeches to deliver, sharing their favourite moments from their time at PGP. We will miss you, Year 6, and wish you all the very best of luck at your next #schools.
@isaschools @iapsuk @ISC_schools #Fulham #SW6

3
Today was the Year 6 Graduation Ceremony. The chil 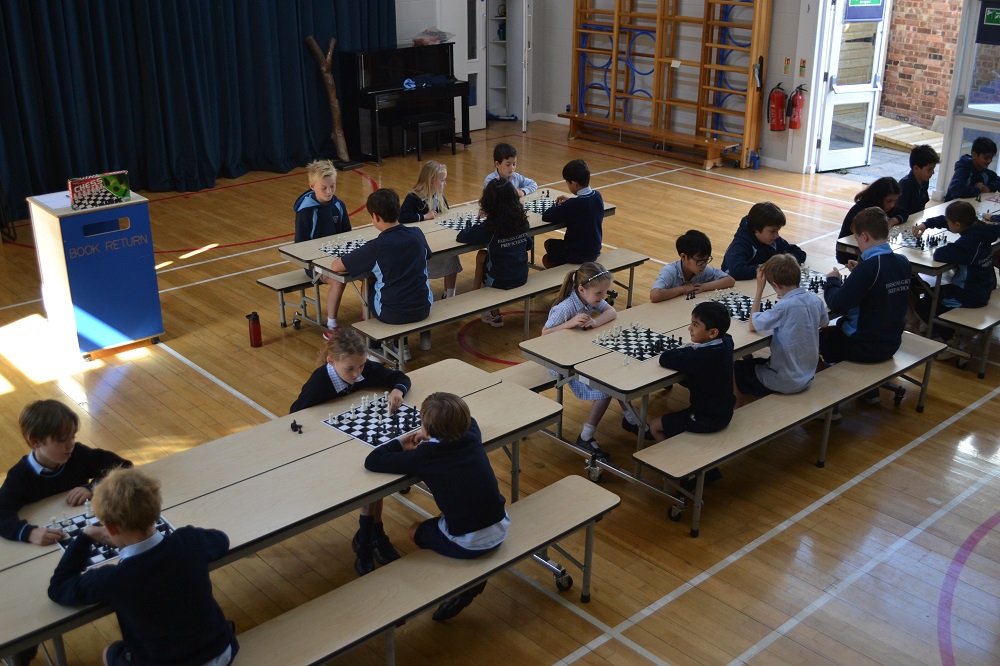 It was a rollercoaster of a ride in the hall recently.  The summer term chess competition was open to all years and all those who play chess (not just those in the Chess Gambit Clubs) and 22 players paired up. Each player played at least two games. Mr Viv was very impressed by the sportsmanship throughout, especially when the pressure started to rise. Ten-minute games added to the excitement. It was all about going for it.

The winners of each round progressed through the rounds and there were chances for two of the top scorers in the runners-up competition to re-join the main competition. The final between Eric and Axel went right to the last 30 seconds.

A daring check on the back-rank by white’s rook (while Axel was behind on points) offered black an opportunity to take white’s rook and stop the check, but the opportunity went unnoticed. Black covered the king with his bishop, leaving white to capture black’s cornered rook, thereby gaining the extra points needed to win: Axel 25, Eric 21. It was an amazing game and an exciting end to a great competition. Well done to all who took part!

Categories: General news
We use cookies on our website to give you the most relevant experience by remembering your preferences and repeat visits. By clicking “Accept All”, you consent to the use of ALL the cookies. However, you may visit "Cookie Settings" to provide a controlled consent.
Cookie SettingsReject AllAccept All
Manage consent

This website uses cookies to improve your experience while you navigate through the website. Out of these, the cookies that are categorized as necessary are stored on your browser as they are essential for the working of basic functionalities of the website. We also use third-party cookies that help us analyze and understand how you use this website. These cookies will be stored in your browser only with your consent. You also have the option to opt-out of these cookies. But opting out of some of these cookies may affect your browsing experience.
Necessary Always Enabled
Necessary cookies are absolutely essential for the website to function properly. These cookies ensure basic functionalities and security features of the website, anonymously.
Functional
Functional cookies help to perform certain functionalities like sharing the content of the website on social media platforms, collect feedbacks, and other third-party features.
Performance
Performance cookies are used to understand and analyze the key performance indexes of the website which helps in delivering a better user experience for the visitors.
Analytics
Analytical cookies are used to understand how visitors interact with the website. These cookies help provide information on metrics the number of visitors, bounce rate, traffic source, etc.
Advertisement
Advertisement cookies are used to provide visitors with relevant ads and marketing campaigns. These cookies track visitors across websites and collect information to provide customized ads.
Others
Other uncategorized cookies are those that are being analyzed and have not been classified into a category as yet.
SAVE & ACCEPT
EXCELLENT!