Year 6 loved the Wallace Collection. We had a wond

On 21 March 1804 there are references in The Times of the sale of Fulham Lodge, a villa which stood in extensive gardens to the south of Fulham Road. Today the school stands in part of those gardens. Fulham Lodge was the home of Miss Eliza Carey, a beautiful actress in her day, and a favourite haunt of Fredrick, Duke of York, son of George III. Fulham Lodge was pulled down in 1847 and various houses built on the land including a new Fulham Lodge which would later be renamed Eridge House.  The house was bought by Mr John Glenny, an outfitter with a shop on the Strand, who was the brother of George Glenny who owned the extensive fruit and vegetable nursery in the open fields on the north side of Fulham Road.

The building was then purchased by Mr Fredrick Wright in 1867 and renamed Eridge House. It is not entirely certain why he chose the new name, but the most likely explanation is that the Wrights came from Sussex. There is historical evidence to show they had connections with the High Weald region, where Eridge Rocks is a beautiul area of woodland and sandstone rocks.

Eridge House survived the Blitz in WWII when bombs landed close by along the Fulham Road and around Putney Bridge. Since then it has been both a private residence and, because of its considerable size, an office for a department of Fulham and Hammersmith Council. It was put up for sale in 2001 and purchased by the present owners who converted the building for use as a school.

Eridge House School grew rapidly with extensions to the original building on the north and western facades. New classrooms, a Mac suite and the school hall were added along with new kitchens. The building has considerable outdoor space with mini tennis courts and various playgrounds. It has many old and well-established trees dating back to its garden days. The school changed its name to Parsons Green Prep in 2014, but the name Eridge House can still be seen on the original front gate. Today the school has become one of the leading prep schools in west London. 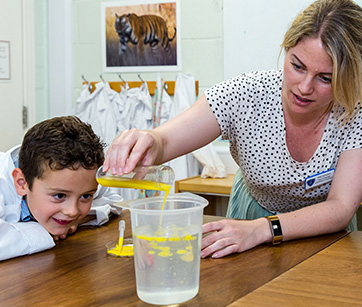 Admissions
We use cookies on our website to give you the most relevant experience by remembering your preferences and repeat visits. By clicking “Accept All”, you consent to the use of ALL the cookies. However, you may visit "Cookie Settings" to provide a controlled consent.
Cookie SettingsReject AllAccept All
Manage consent

This website uses cookies to improve your experience while you navigate through the website. Out of these, the cookies that are categorized as necessary are stored on your browser as they are essential for the working of basic functionalities of the website. We also use third-party cookies that help us analyze and understand how you use this website. These cookies will be stored in your browser only with your consent. You also have the option to opt-out of these cookies. But opting out of some of these cookies may affect your browsing experience.
Necessary Always Enabled

Performance cookies are used to understand and analyze the key performance indexes of the website which helps in delivering a better user experience for the visitors.

Analytical cookies are used to understand how visitors interact with the website. These cookies help provide information on metrics the number of visitors, bounce rate, traffic source, etc.

Advertisement cookies are used to provide visitors with relevant ads and marketing campaigns. These cookies track visitors across websites and collect information to provide customized ads.

Other uncategorized cookies are those that are being analyzed and have not been classified into a category as yet.